Tegan Comber - Cordwalles Junior School
Awarded for a special achievement and being a role model for the GLF trust values.

Tegan has shown exceptional effort, resilience and positivity during her time in Year 5 at the Royal Marsden, and throughout this academic year, returning to school in Year 6. She is always smiling, never complains and gets involved in everything we do at school.

We would like her positive attitude to learning and resilience to be recognised formally; we see this as a fitting award for Tegan.

Tegan was diagnosed with a Wilm's tumor during the Summer holidays of 2016. She had to have an operation and a course of chemotherapy and radiotherapy, and spent a lot of time going in and out of The Royal Marsden Hospital. When she was well enough, she even attended some lessons in the hospital because she wasn't able to come to Cordwalles. She was finally able to return to school at Cordwalles with herfriends in October 2017, straight into Year 6.

We are all very proud of Tegan. She has thrown herself back into school life and her confidence has bounced back. Across the year, Tegan has taken part in our school events and school trips. She was unwavering when tackling the SATs preparation, which showed her that she was capable of achieving highly in her subjects, despite missing a great deal of her education the previous year. SATs week came and went; Tegan had 100% attendance that week and showed huge resilience under the circumstances.

We feel that Tegan's attitude, aptitude and resilience is of significant note and is a huge achievement against all the odds she has faced for such a young child. Tegan is an inspiration to us all.

Zach Nichol  - Cuddington Croft Primary School
Awarded for a special achievement and being a role model for the GLF trust values.

Zach is your normal year 2 boy, a bundle of energy who gives everything his all. He loves sport and particularly football which he is always keen to play. What makes Zach unique is that he has Diplegic Cerebal Palsy, this has a marked effect on gross and fine motor skills. In school you can spot Zach easily as he wears a superb pair of football themed special shoes.

Zach has been becoming much more aware of his disability. But rather than seeing this as a negative, He wanted to show that actually being disabled is just about being different and being different is unique and that’s ok. As a result Zach decided that he wanted to raise money for CP Sport.

This year at school, Zach told his teachers thaI he was hoping to raise some money for CP Sport by doing something he loves - scoring goals! He explained to them that sometimes he finds it difficult to balance and his legs hurt, but by playing football and cricket he keeps himself fit and this helps with his physiotherapy. As a result of his effort and training he now plays for Chelsea’s Pan disability team and working towards his  first tournament at the end of May!

CP Sport helps children like me, providing opportunity to participate in lots of sports I might have CP but it doesn’t have me! So Zach, with a few of his friends, organised a competition to take on his big brother and some of his friends to have a penalty shoot out. They planned to raise money by seeing how many goals they could score against them in a round robin format lasting ten minutes!

The outcome was 33 goals, but also a staggering £1009 raised for charity! This money will mean over 200 kids with CP can have a kickstart football day.

After the event, Zach delivered presentations to his year group at school, his Chelsea squad and his Beavers Colony. As is often the case with these types of things the impact is felt wider than hoped/ After he presented to his Beaver colony, his entire colony then worked on their disability badges. He also set up a just giving page, which is still open if you should wish to donate.

Zach's mum says "The whole process came from a simple idea to try and increase his confidence, whilst achieving that, has also taught our whole family about giving, teamwork, having fun together, involving friends, impact of social media, internet comms with the CP sport website and just giving page, humility, and most importantly Zach has realised that he has got a lot of support from very many people" 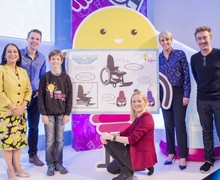 Under the award criteria of making a special achievement, GLF are proud to announce that Finlay is the first recipient of GLF's Excellence Award. Finaly won a National Science Award called the Statoil Young Imagineers competition hosted by the Science Museum in London. Further information about the award can be found here: Britain's Young Imagineers

He designed a prototype 'hover wheelchair' that helps wheelchair users to access buses, trains and rough terrain without the need for help. Finlay’s invention was a carbon fibre hover wheelchair with titanium wheels. Using magnetics, the idea was designed to assist wheelchair users to get upstairs, onto trains and buses without needing to ask for help. Finlay’s idea was inspired by seeing his Nan who struggled with stairs and with getting on the bus and his Aunt who uses a wheelchair. His entry will be produced and exhibited in the Science Museum during the start of 2018.

Aside from his own achievement, by winning the competition, Finlay's award has benefited the other children at Salfords to enable them to flourish in Science as well. The year 6 children will receive 50 copies of the book 'This Book Thinks You're a Scientist'. They will also receive a Science Museum Outreach Team visit to lead a high quality day of Science for the whole year group.

A Multi-Academy Trust established in 2012, we believe that every child in our schools can achieve the highest academic standards whilst enjoying a vibrant, challenging and rich curriculum. Whilst operating as a part of a family, each school exists in its own right maintaining its own unique characteristics and individual identity.

GLF Schools is committed to safeguarding and promoting the welfare of children and expects all staff and volunteers to share this commitment.

*
Cookie Notice: We use cookies on this site to improve your user experience.
Accept Find out more